The Path to Kindness: Poems of Connection and Joy
by James Crews (Editor)

This book has poems from many different poets on all types of subjects that all lead back to kindness, love, and joy. Each poem has a little snippet of beauty, something we can recognize around us in life and say “this is a good thing.”

I like how simple many of the poems are. They cut right to the heart of something that we usually overlook: a child swimming, a family getting waffles at a hotel, a tulip, a heartbeat, the smell of clean laundry.

END_OF_DOCUMENT_TOKEN_TO_BE_REPLACED

This children’s picture book introduces the idea of neutrinos to young readers in a simple way. The text is in rhyme, and the illustrations help the reader to visualize an imagined concept of neutrinos even though they are so small that we can’t see them.

Neutrinos can pass right through us all the time because they don’t have an electrical charge, so they don’t interact with matter in the same way that other particles do. Scientists are still studying neutrinos and learning more about how they work. This book encourages the reader to someday study physics and maybe make their own discoveries!

Since the author is a physicist themselves, the information appears to be reliable and accurate. I appreciated the scientific integrity in the wording of some of the theories presented.

I loved the cute artwork! The bright colors are attractive, and each page illustrates something interesting about neutrinos. At the back of the book, there are more detailed explanations about some of the properties of neutrinos and how physicists are studying them.

I actually learned some new things from this book! This would be such a great gift for any kids who are interested in science.

The Stardust That Made Us: A Visual Exploration of Chemistry, Atoms, Elements, and the Universe
by Colin Stuart (Goodreads Author), Ximo Abadía (Illustrations)

This book teaches the reader about the periodic table, how the elements were discovered and categorized, and how each element behaves. We learn about the scientists throughout history who studied and discovered new elements, and how scientists today are still searching for new super-heavy elements.

I especially liked the parts that explain how we use various elements in our everyday lives. There is fluoride in our toothpaste, neon in bright signs, helium in balloons, chlorine in our stomach acid, and iodine in our salt. Bromine is used in flame retardants, boron is in bulletproof vests, and bismuth in makeup and hair spray. We have chromium coating on our cutlery, and our pipes are made of copper. Indium makes our smartphone screens touch-sensitive.

I also liked the explanations of how the different elements got their names. They are named after cities, famous scientists, Greek gods, and planets. There is an entire chapter all about the Nobel prize, and the most famous Nobel winners who also have elements named after them. It was so interesting to learn all the history behind the periodic table!

The artwork is so colorful and attractive. The design of each page is beautifully organized with factoids and bits of information in separate boxes on the page. It makes it easy to read, and it catches your attention.

One thing that I appreciated about this book is that when they are talking about a scientific theory, they make it clear that it is a theory, not proven fact. The writing is careful to be accurate about how they word things, so as not to give the impression that things are facts, when it’s really just a theory. I love scientific books that have integrity like that!

This book of poetry is divided into sections for Air, Water, Earth, and Fire. The poems range into various topics about thunderstorms, nightmares, animals, trees, stars, technology, and a flyswatter.

My favorite poem was “Harpist”, about a harpist playing her instrument like it is a giant golden butterfly. She strokes the strings like the veins of a butterfly wing.

None of the poems are in rhyme, and there is no meter. There are some lines with clever similes that I really enjoyed, and other similes that just sounded dumb to me or didn’t make sense. But that is poetry. It speaks to people in different ways.

Each poem is beautifully illustrated in soft colors. The artwork is fuzzy and misty and imaginative.

Stopping By Woods on a Snowy Evening
by Robert Frost, Vivian Mineker (Illustrations)
5 out of 5 stars

I am in awe of how beautifully this book captures the majesty and mystery of Robert Frost’s poem. The narrator stops in the woods to reminisce about his life, and he is visited by the ghostly memories of his family and friends who have departed. They all come vividly back to him. He cherishes those memories of the people he has lost. He has one of those moments of inspiration when you realize that your journey has led you to a place of beauty and heart’s ease; all these things are explored in this lovely picture book.

END_OF_DOCUMENT_TOKEN_TO_BE_REPLACED

I Wish I Had a Wookiee: And Other Poems for Our Galaxy
by Ian Doescher (Goodreads Author), Tim Budgen (Illustrator)
4 out of 5 stars

I wish I had a Wookie,
To keep the monsters out.
If nightmares came to get me,
You’d hear Chewbacca shout…

This adorable book has poems about Star Wars for children. Some of them are funny, some of them are a little more serious. Some are short or long or in between. They all have cute illustrations! I just love the light-hearted style of these poems, and the art style reflects that silly and playful mood.

Most of the poems deal with every day childhood things like scraping your knee, playing sports, caring for a pet, going to school, hanging with grandparents, and things like that. It’s so cute to see these things through the perspective of beloved Star Wars characters, or children who dress up in costume as their favorite character.

This book would be so much fun to read together with young Star Wars fans. What a delight!

This short poem is one of my favorites…
“Trash Compactor”
My dad yells, “Mae! What have you done?”
He bursts in with a crash.
But how can I create the scene
Unless I use real trash?

Haha! This book will definitely get you laughing!

I got 64% of the way into the book and decided to DNF it for now. About 90% of the poems are about death. They are very gloomy, all about suffering and despair and darkness. It was making me depressed, so I decided to DNF it.

The poetry is good. Some are almost genius. There were several poems that really touched my heart. The Brontës certainly have a way with words. So many of the phrases are beautifully crafted.

These poems are very emotional and wild and raging like a storm. But they can also embrace a little detail, a look, or word, or the simple comfort of a hearth.

END_OF_DOCUMENT_TOKEN_TO_BE_REPLACED

The Road Not Taken
by Robert Frost, Vivian Mineker (Illustrator)
5 out of 5 stars

“I took the road less traveled by, and that has made all the difference.”
I am in awe of how beautifully this book captures the majesty and mystery of Robert Frost’s poem. That moment of indecision- which path to take- and those moments of inspiration when you realize that your journey has led you to a place of beauty and heart’s ease; all these things are explored in this lovely picture book.

The artwork is warm and welcoming, inviting the reader into the story of a young man who is making choices in life. He grows up, gets married, and has children and grandchildren, and looks back on his journey and the choices he has made that have led him through his life. The illustrations are beautifully colored in warm yellows and oranges as the leaves fall from the trees in an autumn woodland.

END_OF_DOCUMENT_TOKEN_TO_BE_REPLACED

A Book That Takes Its Time: An Unhurried Adventure in Creative Mindfulness
by Irene Smit, Astrid van der Hulst
5 out of 5 stars
This beautiful book has postcards, stickers, small posters, removable journal booklets, and a dozen other adorable things included! You can write lists, read poetry, make a collage, write in your thoughts, or learn to do your own creative hand-lettering. There are articles about following your dreams, letting go of stress, reaching out with kindness, slowing down, and being more creative.

There are inspirational stories, beautiful poetry, and famous quotes. You’ll find common sense advice about how to get rid of old habits, how to find your life balance, how to start an exercise routine, how to connect with nature, how to be vulnerable, and how to be more grateful.

You can make your own timeline, cook up some of the recipes, send a postcard to a friend, or take a photograph. There are dozens of activities that you can choose from! END_OF_DOCUMENT_TOKEN_TO_BE_REPLACED 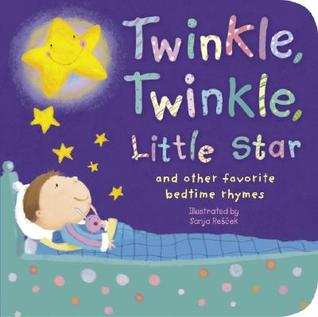 Twinkle, Twinkle, Little Star: And Other Favorite Bedtime Rhymes
by Sanja Rešček
5 out of 5 stars
This baby board book has over a dozen familiar bedtime rhymes, including “Twinkle Twinkle, Little Star”, “Jack Be Nimble”, “Wee Willie Winkie”, “Hush, Little Baby”, and “Diddle Diddle Dumpling.” There is one especially sweet poem that I had never heard before called “Teddy Bear, Teddy Bear.” The teddy bear touches their nose, touches their toes, turns around, turns out the light, and says good night. It’s adorable!

The best thing about this book is the beautiful illustrations in soft pastel colors and a simple style. The drawings are so cute! I loved the designs of each little character snuggling in bed, sailing through the night sky, or being rocked to sleep by the moon. END_OF_DOCUMENT_TOKEN_TO_BE_REPLACED

A group of neighbors decide to plant a rooftop garden. They plant the seeds, water them, and weed. They encourage pollinators like butterflies and bees, but they gently remove the pesky bugs and snails. Finally they can harvest their crop of vegetables and have a big feast!
What Goes Inside?:
The mysterious botanist, Dr. Carnation, gives us a tour of his secluded gardens, where weird and wild plants are growing. We see carnivorous plants and stinky flowers. There are strange shapes in the blossoms and fungi. We learn about orchids that look like flies or babies or dancing girls.
Georgie is a little nervous about her first day at a new school. Her neighborhood friends are in a different class. What if she can't make any new friends? But Georgie sees a girl with pink shoes and asks to be her friend, and by the end of the day Georgie has three new friends. Georgie makes up a dance and teaches it to her new friends at school. Even the stuck-up kids want to learn Georgie's new dance. Georgie learns to be confident and keep trying, even when she feels nervous or anxious. Each day is new opportunity to learn and be kind!