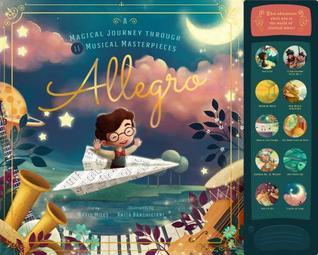 Allegro: A Musical Journey Through 11 Musical Masterpieces
by David W Miles,  Anita Barghigiani (Illustrations)
5 out of 5 stars
A little boy named Allegro is fed up with practicing piano. He throws his sheet music on the floor, and petulantly sits and thinks about music. He goes on a magical journey to discover new music and how beautiful music can truly be. Through all the different moods and styles of classical music, he learns to love and appreciate the emotions and sensations that music can offer to us. END_OF_DOCUMENT_TOKEN_TO_BE_REPLACED

50 Things to Do in Baby’s First Year: The First-Time Mom’s Guide for Your Baby, Yourself, and Your Sanity
by Amanda Rodriguez
4 out of 5 stars
This book has advice and tips for coping from baby’s birth right up to celebrating their first birthday. It includes things like dealing with inlaws and grandparents, sharing on social media, getting enough sleep, breastfeeding, teething, postpartum depression, getting support from friends and family, sleep and nap routines, keeping up with the photo book or memory journal, starting baby on solid foods, working out after birth, baby’s motor skills, weaning, nutrition for mom and child, and of course, how to throw the perfect first birthday party! END_OF_DOCUMENT_TOKEN_TO_BE_REPLACED

A Handful of Magic
by Stephen Elboz
4 out of 5 stars on GoodReads
Kit is full of mischief and unruly vandalism, until his misconduct results in his best friend, Prince Henry being bitten by a werewolf. As Kit works to save Henry from the werewolf’s poison, he uncovers a deadly plot to cripple all of England while children are used as slaves to work in underground mines. To save his friends, Kit must learn to use his magical abilities for good, instead of for foolish pranks.

Full of steampunk magic and mythical creatures, this book creates a world where magic is at war with new scientific discoveries like the electric light and telegraph. Kit’s father, a prominent wizard-adviser to Queen Victoria, worries that magic is becoming obsolete in the face of new scientific inventions, and Kit is determined to prove that magic is just as relevant and necessary as it ever was.

I didn’t quite like Kit and his friends at first, because of their foolishness and vandalism, but they began to grow and learn, and their good hearts and generous spirits began to show through, so in the end, I liked them all and was cheering for them through their adventures. END_OF_DOCUMENT_TOKEN_TO_BE_REPLACED

C is for Car
Let’s Count Georgia
A "youth" enlists in the Union Army during the American Civil War with visions of glory in his mind, but he runs away like a coward in the first skirmish. As he moves as far as he can from the battlefield, he encounters wounded men headed toward the hospital. He hears their stories of courage, noting that they wear a "red badge" of their own blood. He is ashamed but finds ways to excuse his behavior in his own mind. He has an altercation with a fellow soldier, who gives him a minor wound on his head. At last he finds his way back to his own regiment, joining them again, pretending that he got his wound in battle. The next day when the regiment begins to move forward into battle again, the youth wonders if he will have the courage to stand and fight this second time.
Animals and their babies create a little heart from their trunks, tails, or wings. Two penguins curve their beaks together to make a heart. A seahorse makes a heart with another seahorse, joining their tails together. Two squirrels reach across the branches to boop their noses and curl their tails into a heart. And a mommy and child make a little heart with their fingers!