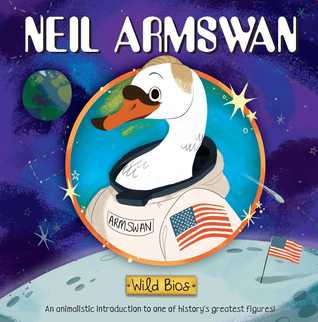 Wild Bios: Neil Armswan
by Courtney Acampora, Maggie Fischer,  Zoe Persico
5 out of 5 stars on GoodReads
“One small step for swan, one giant leap for birdkind.”
This colorful board book tells the story of Neil Armstrong’s journey to the moon, but with a cast of animal characters, and hilarious animal puns.

This book follows his life story and legacy, starting from when Neil “Armswan” grew up as the oldest of his “flock” with two siblings. Neil learns to fly, becomes an Eagle Scout, and serves in the Korean War where he receives three air medals as a naval aviator. He becomes a test pilot, and falls in love, starting his own “flock” with his lovebird “Gannet”. They “migrate” to Houston with their “cygnets”, where Neil launches into orbit in the Gemini 8 and Apollo 11 missions, leaving “webbed” footprints on the Moon.

I loved the silly puns and adorable animal characters! The whole book is so bright and funny, and the legacy and accomplishments are truly inspiring. The writing is perfect to read aloud with young children, and the illustrations are engaging with interesting details in the background to capture the attention of little readers.

This book is also well-timed with the 50th anniversary of the Apollo 11 mission, when so many people are celebrating that national accomplishment, and little ones might be wondering what it’s all about.
I just love this entire Wild Bios board book series, and every book is gold!

Disclaimer: I received a copy of this book from the publisher via Media Masters Publicity in exchange for a free and honest review. All the opinions stated here are my own true thoughts, and are not influenced by anyone.

C is for Car
Let’s Count Georgia
A "youth" enlists in the Union Army during the American Civil War with visions of glory in his mind, but he runs away like a coward in the first skirmish. As he moves as far as he can from the battlefield, he encounters wounded men headed toward the hospital. He hears their stories of courage, noting that they wear a "red badge" of their own blood. He is ashamed but finds ways to excuse his behavior in his own mind. He has an altercation with a fellow soldier, who gives him a minor wound on his head. At last he finds his way back to his own regiment, joining them again, pretending that he got his wound in battle. The next day when the regiment begins to move forward into battle again, the youth wonders if he will have the courage to stand and fight this second time.
Animals and their babies create a little heart from their trunks, tails, or wings. Two penguins curve their beaks together to make a heart. A seahorse makes a heart with another seahorse, joining their tails together. Two squirrels reach across the branches to boop their noses and curl their tails into a heart. And a mommy and child make a little heart with their fingers!