Amy Dorrit was born in debtor’s prison, where her father has been incarcerated for so long that he is called the Father of the Marshalsea prison. Arthur Clenham has just returned to England after spending most of his adult life abroad. He investigates a family mystery, believing that his parents have somehow wronged the Dorrit family, but unsure how to make restitution. He befriends Amy, nicknaming her “Little Dorrit”, since she is the youngest of her family.

Typical of Dickens, there are numerous subplots, a complex tapestry of connections between characters, and various plot-lines that intersect and combine. I love the complexity and depth of his plots! There is a lot of wonderful family drama, blackmail, financial ruin and sudden financial gain, romance and despair, and of course, that inimitable Dickens’ charm.
END_OF_DOCUMENT_TOKEN_TO_BE_REPLACED

The Battle of Life
by Charles Dickens
5 out of 5 stars on GoodReads
Grace and Marion are sisters, saying goodbye to their childhood friend, Alfred, who has just come of age after growing up as a ward to the girls’ father, Dr. Jeddler. Alfred promises to come back someday to marry Marion when he has finished medical school and made his fortune. The years pass, but their happy plans take a sorrowful turn, and it will take all their courage to survive the battle of life.
END_OF_DOCUMENT_TOKEN_TO_BE_REPLACED 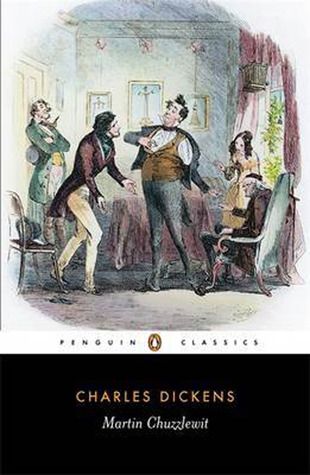 Old Martin Chuzzlewit is disgusted with his greedy relatives who only want his money, so he disinherits everyone, including his grandson, Young Martin, who is named after him. Young Martin falls in love with an orphaned ward, Mary Graham, who acts as Old Martin’s nursemaid. But the two young people are torn apart when the family quarrel causes Young Martin to seek his fortune out in the world.

When he goes to work for a hypocritical architect, Mr. Pecksniff, Young Martin befriends poor Tom Pinch, a lowly clerk with a good and innocent heart. Because of his generosity and humility, Tom is always being taken advantage of and overlooked.

Mr. Pecksniff and his two daughters renew their relationship with their cousin, Jonas Chuzzlewit, a devious man who longs to inherit the family business and be rid of his doddering old father.

This book pairs whimsical artwork of fruit together with history and myths about each fruit. Did you know that when pineapples were first introduced to Europe only the very wealthy could afford them? Legend says that spirits inhabit cherry trees. There is a story that a starving woman prayed for food, and the beads of her necklace were turned into blueberries for her to eat.
5 stars- This book has tons of cool crafts that can be done with paper and stickers! You can fold paper airplanes, envelopes, and finger puppets. You can make a magic wand, a paper globe, and a crown and decorate them with stickers and washi tape. There are reusable stickers for an outer space scene. There are two cute notebooks that you can decorate! You can even make a pretty suncatcher and a wind sock.
1.5 out of 5 stars- This book gives advice on exercise, nutrition, and staying healthy beyond 50.
Each page in this book has a little lesson or affirmation to help you navigate the difficulties of life and find peace within yourself. At the top of the page is a main statement, and then a short paragraph or two explaining the concept and how you can apply is to your own self-care.