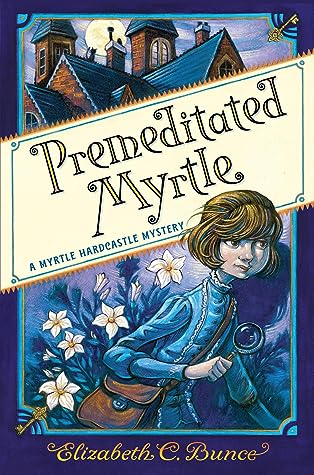 Premeditated Myrtle
by Elizabeth C. Bunce (Goodreads Author)5 out of 5 stars
Myrtle is the daughter of a Court Prosecutor, and follows her father’s cases with alacrity. She loves to read the Police reports and studies toxicology. When her next-door neighbor is murdered, Myrtle is sure she knows how to solve the case, but how is a Proper Young Lady supposed to adhere to the Rules of Etiquette AND have the freedom to run around town solving crimes? Only with the help of her redoubtable governess, Miss Judson.

One of the things that made me fall in love with this book is the incredible character development. I love how the main characters change their minds, discover new information, grow in their personalities and abilities, and suddenly realize that their relationships with other characters can be different.

I was fully invested in the character growth and the story from the very first page. The writing drew me in, and emotionally hooked me into the lives of the characters. I was massively curious about every clue. I couldn’t wait to read the next chapter and the next!

I wanted to see how all the disparate clues could possibly come together to a rational conclusion. I was so pleased with the complexity of the mystery, and yet it all made sense in the end with everything explained and every loose end wrapped neatly in a bow.

Myrtle herself is a fantastic main heroine. She is energetic and emotional and incredibly intelligent. I absolutely adore her strong relationships with her father and with Miss Judson. They remind me of the Bible verse that says, “As iron sharpens iron, so one person sharpens another.” These three main characters, Myrtle, her father, and Miss Judson, all have moments of conflict in their relationships when they each want different things and they disagree and argue. But in the end, those conflicts strengthen and invigorate their love for each other as they learn from one another. Utterly brilliant writing!

One of the greatest things in this book is the way that my opinions of the secondary characters changed throughout the story. In the beginning there were two secondary characters, one of which I hated, and the other who I loved. Gradually and slowly through the book, I began to begrudgingly like the character I had previously hated, and I began to suspect and despise the character I had previously loved. It’s all done so realistically and gradually as the plot thickens and the characters react to each new clue.
At first I thought, “Oooh, I hate that character! They are just the worst!” In the next scene, I thought, “Well, so they did one good thing, but I still hate them!” Then, “Okay, so maybe they are not ALL bad, but they are still annoying.” Then, “Okay, so maybe they are a good character, but I still don’t like them all that much.” And finally at the end, “Oh, I love this character! Aren’t they great? They are just the best ever!”

I have seldom seen such natural and dynamic character changes as the true nature and personalities of the characters are revealed. Brilliant writing!

Another nice feature of this book is the gorgeous cover art, which gives little clues to the contents of the book with lilies, a key, and a cat on the roof. All these things feature strongly in the plot, and I love how the artwork incorporates them.

The designs at the beginning of each chapter are also special, with pretend quotes from a non-existent book, entitled “Principles of Detection” by the fictional H.M. Hardcastle.

I wish I could give this book 10 stars, and I look forward with extreme eagerness for the next books in the series!