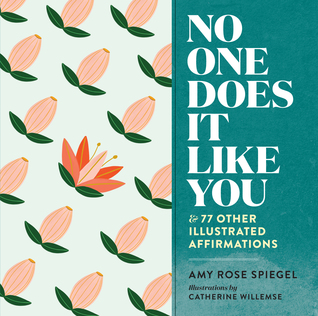 No One Does It Like You: 78 Illustrated Affirmations for Self-Kindness
by Amy Rose Spiegel, Catherine Willemse (Illustrations)
2 out of 5 stars
These affirmations and positive sayings are paired with illustrations that uplift and inspire the reader! I love the poignant and thoughtful axioms. Some of them really made me think about life in a different way!

“Picture yourself as a little kid. Remember the promises you want to keep to that person.”
“Give people a reason to remember your conversations, whether you do that by speaking or listening.”
“Carve out your own world.”

However, there were a few sayings that sounded very strange to me, and didn’t make much sense. (And there were a couple with profanity in them.)
For instance, “Your ethics and politics are your architecture; build up those convictions and you’ll have built a life.”
Since when does politics become a part of your identity?

And how does which way you vote, build you a life? I can see how your ethics and beliefs are a big portion of your identity, but how does politics fit into that? Politics is about choosing which people are the best at organizing and making decisions for your state or for the country. It doesn’t really have much to do with personal identity. It’s someone’s job. We elect them to do a job. How does that affect my identity, my “architecture”? Sounds like some kind of socialist weird ideology to me, where they try to get people loyal to their party by telling people that their identity is wrapped up in who wins an election.

Another strange one is “Money isn’t dignity, or even that dignified, and it’s definitely not an antidepressant.”
Except people who are truly poor may need money to help them establish some dignity in their lives. I’ve known people who lived in huts with dirt floors. I know they think that money could bring them a little more dignity. I’ve known children with holes in their shoes, and I’m sure they would be happier and less depressed if they had the money to buy nice shoes. The quote in this book should say ‘An excess of money isn’t dignity. Buying a fancy car and designer clothing is not an antidepressant.’ To millions of people in the world, a little extra money could help them have a private toilet in their home instead of having to use the bushes behind their house. Dignity.

I like the cute illustrations with bright and bold colors! The art style is really lovely, and depicts real people living their lives to the fullest, and embracing each moment. The people are diverse and quirky. They have coffee with a friend, snuggle with a loved one, make a craft, watch a sunset, play in the park, help someone, do their laundry, take a nap, or have a food fight.

However, there are a couple of swear words in this book. Two F words and an H-E-double-hockey-sticks. At least it wasn’t all over the book. I suppose I should be grateful that there were only a couple of places with profanity.