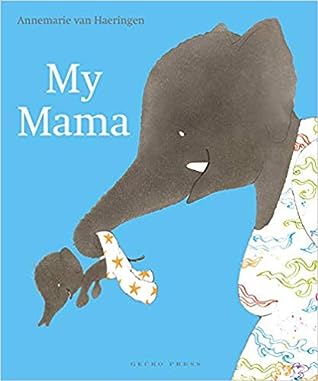 My Mama
by Annemarie van Haeringen
4 out of 5 stars
A little elephant child describes all the ways his mama plays with him, helps him, and guides him. But he describes it all wrong! He says that his mama loves to play cars with him, and he likes for HER to tidy away the toys afterward. He “helps” his mama with the grocery shopping, but eats an entire bag of chips behind her back! He has to push his mama on the swings, so SHE can go higher and higher. He says that HE is the one always in charge, as he rides his mama like a pretend horse galloping around the room. The illustrations prove that the little elephant child is mistaken, and the cheeky text has a silly charm.

This sweet book has soft illustrations and a simple story. There isn’t a linear plot, but little snippets of scenes between mother and son. At the end, the mother elephant tucks her son into bed and a peaceful little elephant gazes up at the stars.
At one point, the elephant child urinates on the garden plants, and says, “I like watering the plants.” His mama sprinkles his head with water to tease him, and he thinks it is raining. I thought that was strange. Why didn’t his mother reprimand him for killing her plants and urinating outdoors? Weird. Although, I guess elephants as animals are allowed to urinate on plants outdoors, even if they are anthropomorphized and wear clothes. I worry that it would encourage children to misbehave though.

I like the soft artwork and the cute characters in this book! It’s adorable!

Gnome for the Holidays
Four friends are concerned that the winter is not ending. They begin to suspect that there may be magical forces at work which are holding off the spring. A mysterious green man gives them magical objects, but they don't know how to use them. They start to wonder if ancient legends are controlling the weather.
Preorder NOW! https://www.familius.com/book/lets-count-georgia/
What are the character traits that make a good leader? This book explores ten important attributes that are essential for any leadership role, and demonstrates how C. S. Lewis displayed those traits through his life and his writing. Here we analyze the details of why Lewis's influence still continues to inspire countless Christians through his fiction and apologetic books.