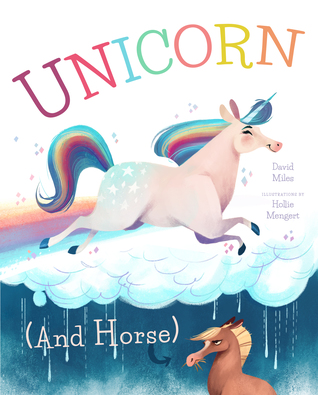 Unicorn (and Horse)
by David W. Miles, Hollie Mengert (Illustrator)
5 out of 5 stars
Horse is plain and frumpy. He’s jealous of the gorgeous Unicorn, who eats pink cupcakes and makes rainbows. Unicorn dances around spreading cheer and sunshine. Horse eats hay and scowls at everyone with a grumpy attitude. Can these two ever resolve their differences and becomes friends?

This story is hilarious! It’s so much fun that I read it three times in a row!
I laughed and laughed at the funny predicaments poor Horse has to deal with. The illustrations are a big part of the humor, with silly expressions on the character’s faces and background details that make the story even funnier. I just love the soft cartoon style of the illustrations. The artwork is bright and vibrant with adorable animal characters and plenty of action.
The story itself is brilliantly worded, and the pacing is just right for the jokes and humor. Even though the writing is simple for children, it’s organized in a way that makes a big impact and surprises you into laughing. Each word is vivid and descriptive, plunging the reader right into the story.

It wasn’t until halfway through the book that I realized that Unicorn is a male. I assumed it was a female Unicorn, but then the text refers to Unicorn as “he”. I’m not sure if that is some kind of statement about something, or if it’s just a funny nod to the idea that there must be male unicorns, even though we usually think of them as female. It didn’t impact my enjoyment of the book, and I loved the brotherly friendship that develops between Horse and Unicorn.