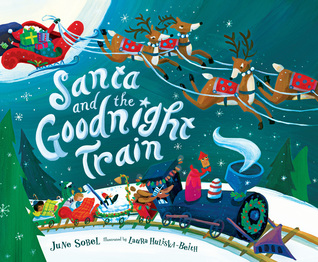 Santa and the Goodnight Train
by June Sobel , Laura Huliska-Beith
5 out of 5 stars on GoodReads
The children are climbing aboard the GoodNight Train on their way to find Santa on Christmas Eve! The engine runs on cookies and makes a jingle jingle sound as it chugs along. The conductor makes sure everyone has their ticket, their PJs, and a snug blanket. The train whooshes past gingerbread houses, candy canes, squirrels celebrating Christmas with acorn gifts, and finally finds Santa counting sheep as the reindeer take a nap. “Wake up! Wake up!… Next stop: North Pole!”

The story is told is delightful rhyme. I really liked the writing, and the poetry has good rhymes and a lovely rhythm in the meter. It’s very easy to read out loud, and flows off the tongue smoothly. There are also places where onomatopoeia is used to mimic the train whistles, “Whoooo! Whoooo!” Those things would be fun to read aloud with a child!
The illustrations are adorable with festive colors! There is snow on the ground, and the whole train is decorated with wreaths and twinkle lights. The elves at the North Pole are colorful and cute. Each child in the train has their own little bed with comfy pillows.

There are lots of little details in the illustrations that add to the story, like drawers full of maps in Santa’s workshop labeled “Northern Hemisphere, Southern Hemisphere, and Outer Space”. There is a lamb in the background who dreams about stealing the engine cookies and eating them all.

Santa’s face is never shown as he is always one step ahead of the train. We see only his boot running off the edge of the page, or the back of his sleigh as he speeds out of sight, until the end where he gives toys to the children on the train. Even then, we only see the back of his head. It’s a fun detail that adds to the mystery and magic of Santa!

One of the things that makes this book special is the hidden story line of the lost bear. At the beginning of the book, a little boy drops his teddy bear as he gets on the train, and the bear spends the rest of the book trying to catch up with his boy. He hops onto a passing reindeer, and on the next page he climbs into Santa’s sled, then the bear is seen inside Santa’s sack. Finally at the end of the book, Santa returns the teddy bear to the little boy in the train, and the last page is a sweet illustration of the boy hugging his teddy as he sleeps peacefully aboard the train heading home at the end of their adventures. None of this is mentioned in the actual text, but it’s a lovely detail that shows just how much careful thought and imagination went into this book.