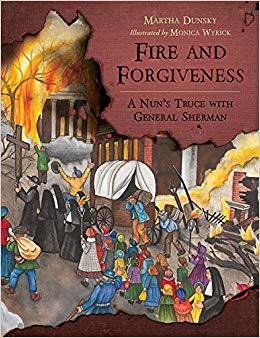 Fire and Forgiveness: A Nun’s Truce with General Sherman
by Martha Dunsky
3 out of 5 stars on GoodReads
In the midst of the American Civil War, two schoolgirls at the Ursuline Convent School for Girls are at war. Jane and Clara play pranks on each other and call one another names. Mother Superior Baptista Lynch urges the girls to reconcile, reminding them that everyone has good in them, but the girls find it difficult to forgive each other.
General Sherman’s army is marching into Columbia, South Carolina, and Mother Baptista writes to him to beg for protection for her school and convent. The cannons are firing on the city, and the Confederate Army retreats, leaving the city defenseless.
In the middle of so much violence, how can Jane and Clara learn to make the peace, when the adults are constantly at war?
I enjoyed this historical account of two real people, Mother Baptista and General Sherman, and their interactions during the surrender of Columbia, SC. And I thought it was sweet to have a fictional story of two fighting schoolgirls intermixed with the real historical facts, giving the history a perspective that children could understand and relate to.

The story kept my interest, and I loved reading the historical factoids at the end along with old photographs from 1865 showing the devastation in Columbia and other historical landmarks.

I enjoyed that the two stories, the fictional and the true, have the same message of striving for peace in the middle of war, and finding respect for your adversary.

The illustrations are fairly good, but I felt like the colors were too bright. The proportions of the characters don’t always look quite correct. It’s not terrible art, but it could be better. It doesn’t look particularly professional.

I have such mixed feelings about this book. It's a collection of short stories, and every single one is depressing! These are the saddest, most awful stories I have ever read. The real problem is that the writing is so brilliant that it really makes you care about the characters! So when everything goes wrong, it is absolutely heartbreaking.
Bambi is born in a peaceful thicket, and he explores the meadow with his mother. He makes friends with the woodland creatures, and meets two other fawns, Feline and Gobo.
This is such a great collection of Agatha Christie's plays! Some I liked more than others, but they were all interesting and mysterious.
The Gunn family love their beautiful country home, but when a nasty factory is built across the road, they decide to attach a balloon to their house and float around the world looking for a new peaceful place to live.