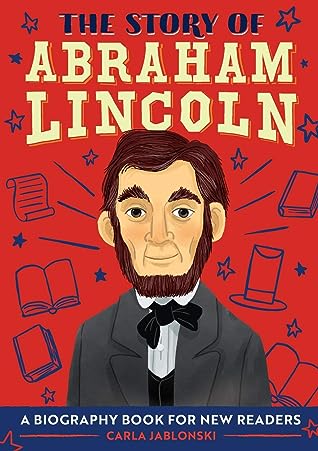 The Story of Abraham Lincoln: A Biography Book for New Readers
by Carla Jablonski
5 out of 5 stars
This children’s book tells the history of Abraham Lincoln, from his childhood to his death.
I like that the story is told with a simple writing style, easy for a child to understand, and there is a glossary at the back from some of the bigger or unfamiliar words. This would be a great book for 7-10 year old readers.

There are fun cartoon illustrations showing Abe as a young boy on the farm, as a young politician, as a family man, and finally as President of the United States. I really like the bright colors and design of the book!
There are also a lot of maps showing different areas of the country, where Lincoln lived, where battles took place, and where the states were divided into Union and Confederates during the American Civil War. There are timelines showing important milestones in Lincoln’s life as well as important political steps in the American nation at the time.

One of the coolest things about this book are the “Jump In the Think Tank” questions that urge the reader to imagine themselves in a log cabin with a dirt floor, or think how you could teach yourself at home like Abe did instead of going to school, or think about ideas you have about what the government should do?

There is even a quiz at the back of the book to see how much you remember from your reading!

I love how this book gives the straight historical facts, encourages the reader to think critically and to use their imagination, and makes history come alive!