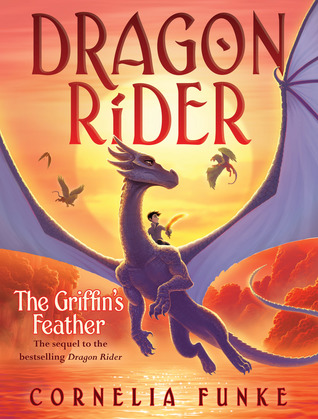 The Griffin’s Feather
by Cornelia Funke (Goodreads Author)
4 out of 5 stars on GoodReads
Firedrake is back! Along with dragon rider, Ben, and the incorrigible Scottish brownie, Sorrel, the whole gang is off on an adventure, with new friends and some new enemies too. They are trying to acquire a rare griffin feather, the only magical way to save a nest of baby Pegasus eggs. Ben worries that this adventure might be too dangerous for Firedrake, since the griffins have a history of warfare with the dragons. It will take fierce courage and loyalty to bring them through this magical adventure together!

I love this author’s writing! The plot is imaginative, full of dry humor and magic. There are wild and wondrous settings all over the world, full of fascinating creatures, both mythical and real.

The main characters (Firedrake, Ben, Sorrell, Twigleg, and Barnabas Greenbloom) are magnificently written, with backstories, deep motivations and fears, and hidden longings that push them forward in the story, shaping their decisions and interactions with others.

However, the supporting characters are fairly boring, without much backstory or depth to them. Some of them were obviously added to simply fill in a plot point, and we don’t know much about them. It feels like there should be a third book in the series, to explore the stories of these supporting characters. What do they want? How do they feel? Why are they there?

There are also far too many new characters introduced. I can barely keep straight all the old characters, and the new ones were almost impossible to remember. I was able to remember the more interesting of the new characters, such as the Pegasus father Anemos, the troll Hothbrodd, the griffins Shrii and Kraa, the tropical bird Me-Rah, and the dragon nicknamed Tattoo. Those characters were memorable with unique personalities.

However, there were a ton of monkey characters that I could never remember. It would have better to just have two important monkey characters, and the rest should have been unnamed monkeys in the background. Why do I need to know the names of eight monkeys who play minimal roles in the plot and have no personality? Or maybe some of them were birds. I can’t remember who is a monkey and who is a bird. That just shows you how unimportant they were to the story.

The plot really is wonderful, and I do love those main characters, but I feel like this could have been a much tighter story with a cleaner story-telling style. There are just too many details, too many characters, too much stuff distracting from the main story.

Still, I enjoyed it immensely! The writing made me feel like the characters are real; their anxieties and longings and love and joy became real to me in so many subtle ways.
Maybe I just expect so much from this author because I love so many of her books.

This book pairs whimsical artwork of fruit together with history and myths about each fruit. Did you know that when pineapples were first introduced to Europe only the very wealthy could afford them? Legend says that spirits inhabit cherry trees. There is a story that a starving woman prayed for food, and the beads of her necklace were turned into blueberries for her to eat.
5 stars- This book has tons of cool crafts that can be done with paper and stickers! You can fold paper airplanes, envelopes, and finger puppets. You can make a magic wand, a paper globe, and a crown and decorate them with stickers and washi tape. There are reusable stickers for an outer space scene. There are two cute notebooks that you can decorate! You can even make a pretty suncatcher and a wind sock.
1.5 out of 5 stars- This book gives advice on exercise, nutrition, and staying healthy beyond 50.
Each page in this book has a little lesson or affirmation to help you navigate the difficulties of life and find peace within yourself. At the top of the page is a main statement, and then a short paragraph or two explaining the concept and how you can apply is to your own self-care.